Start a Wiki
Steven Jonah Williams is the main protagonist of Brickleberry. He is a terrible park ranger at Brickleberry, but he always manages to be "Ranger of the Month" every month. He is voiced by David Herman. Steve is a complete idiot and his mistakes often gets him and the main cast into trouble, which is what drives the plot of the show.

Steve is an overconfident, bumbling park ranger who takes himself and his job way too seriously. Even though he has been named "Ranger of the Month" at Brickleberry every month for several years, he’s not nearly as good at his job as he thinks he is. Steve's "Ranger of the Month" title means everything to him and he will do anything to keep it. He is a complete loser by nature, and is an utterly worthless man and waste of life.

Steve’s father, Jonah, was also a Brickleberry ranger, so he was raised in the park and despite his flaws, knows the park like the back of his hand. Steve dreamed of working at Brickleberry since he was a child but put his dream on hold after his father went missing in the park and was never found.

Steve is conventional (in this definition - accepting orthodox terms at the cost of own individuality) especially towards Woody. His conventional attitude of letting Woody bully him around at many things such as cutting his pay off by half and not allowing him to date the Indian working-by-long-distance ranger Dottie served as a critical driving factor of episode "Hello Dottie". Woody at one point called Steve his "submissive bitch" because of Steve's lenience. In "The Dam Show", Steve vowed to become the leader of the marooned attendants of Woody's birthday party when they became stranded on an island. Steve didn't set up any rules and allowed the people to do whatever they want, which led to the downfall of the small society because the people including Bobby Possumcods and Dr. Kuzniak completed wasted their food supply. They then resorted to roasting and eating 2 baby birds, who were the last 2 of their species (Philadelphia Eagle) despite that they were still only 1-day old newborns.

Steve's incredible stupidity has made him commit mistakes so horrendous that it's very difficult or even impossible time for him to stop feeling guilty for them. He keeps reminding himself about Malloy's parents' Murder-versary and the Squabbits Apocalypse, up to the point he write it on his calendar every year. Woody also brings up a lot of Steve's mistakes from the past to remind present Steve not to repeat them (apparently to no avail) such as when Steve let free a mountain lion in a retirement home or when he got drunk in a Nativity scene and tried having sex with a donkey. Then there was the time he killed 4 young boys by sending them out on a minefield according to "Campin' Ain't Easy", which made Camp Brickleberry close down.

Steve frequently displays that he is an obsessed fan of Viggo Mortensen and that his favorite movie series is Lord of the Rings. Steve's favorite superhero appears to be Spider-Man, given that he has a Spider-Man wallet in "Trailer Park" and a Spider-Man lunchbox in "The Animals Strike Back".

Even though Steve deserves to be fired from his job as a park ranger for incompetence, Woody still keeps him employed and always makes him Ranger of the Month every month. In the episode "Amber Alert", it is revealed that Steve's mom actually offered sexual services (prostitution) to Woody to have Steve keep a job and be named Ranger of the Month every month regardless of Steve's mediocre performance. Steve's mom has done this with him all the time (driving test, basketball team, Obi ranks, a bully at school), which can explain why Steve never learned any proper skills and this is why he is the bumbling idiot who makes the poor decisions that often run him and Brickleberry down into chaos throughout the series.

The main cast despise or neglect Steve a lot up to the point that they figured that him being 2 hours late for work meant that he's dead, so they wrote his gravestone obituary: "Steve Williams: Lived. Died. Fat"

Steve is very overweight up to the point he's somewhat obese but not as heavily obese as Woody or Connie, at least not until near the end of the show in "High Stakes". Steve's favorite food is lasagna. He gets mocked for being really overweight by many characters in the series, even from other overweight characters. Steve is occasionally shown eating junk food such as Cheetos, cookies, chocolate bars, hot dogs, lasagna, donuts and Rice Krispie Treats. His weight issue is the focus of a subplot in the episode "High Stakes", as he couldn't fit in his current uniform any longer, but this was inevitable given he failed to do any proper exercise or dieting.

Steve is so fat that the other main characters complain he has boobs and they're disgusted by it complaining Steve has to lose some weight. Malloy demanded in "Trailer Park" that Steve get a breast reduction. Denzel thinks that Steve's boobs are even bigger than what a woman's would usually be. Woody gets turned on by it in "My Way or the Highway".

Steve unknowingly has the condition pica. He has no problem eating unsanitary objects such as bird poop, coyote mucus, dirt, his own body fat, bear semen (complimenting "It's got a kick to it!") and his own feces and urine.

Steve is known for being ignorant and having little logic. We see him make poor choices on a constant basis. His ignorance should often be more than enough to agitate the show's audience, not just the rest of the main cast. Steve considers Denzel to be his best friend, and therefore get along so well they name their relationship "Ste-Zel", even if Denzel himself is easily agitated by Steve's ignorance.

Steve isn't exactly such a nice person. He is very arrogant and self-centered, wanting to rationalize whatever he does, such as making offensive remarks or making mistakes that put lots of people in danger. Steve was already a terrible person as early as the show's pilot, having spiked Ethel's coffee in order to get her fired from her job, shooting Ethel's hand with a handgun and throwing away a young amputated stump boy into the lake out of spite. He will also bully for fun, such as bullying Malloy for being unable to find a date or when he mocked the young boys that he won (by having rigged) the Be a Cop for a Day raffle.

Steve is shown to be very loyal to Woody for the most part. When Woody denied his employees health insurance and lunch breaks, Steve sided with Woody. Though in Season 3's "Obamascare", Steve's loyalty to his boss appears to be waning since he inflicted attacks on Woody for all the abuse his boss has put him through such as exploiting Woody's crab-cake allergy.

Steve is not only the show's main character, but also the most idiotic of the characters (though BoDean might give him good competition for that title). He's a complete moron and his lack of even the simplest logic usually drives the plot for the majority of the show's episodes. These include: 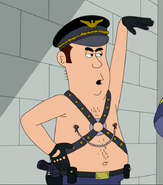 Steve about to take advantage of a drunken Ethel

How Steve appeared in Season 1 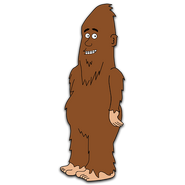 Steve "Big Foot" Williams
Add a photo to this gallery
Retrieved from "https://brickleberry.fandom.com/wiki/Steve_Williams?oldid=11429"
Community content is available under CC-BY-SA unless otherwise noted.